One of the great questions about Boris Johnson has always been his apparent shifts in attitude. From a Telegraph bore/eurosceptic of the '90s, to the liberal (ish) London mayor of the 2000s, to the face of right wing populism and Brexit we know today, Johnson's persona appears to have seen, as Jonathan Lis put it, a number of mutations. The most common explanation for this is self interest: here we have an individual who will say and do anything for power. But I'm less sure. I think there is a kind of consistency to Johnson's attitudes, and it's one that is rather familiar. It's one of the aristocratic populist.

Aristocratic populism is not opposed to privilege. But it is not averse to the idea of service, either. It entails the belief in some form or other of noblesse oblige- the idea that privilege entails obligations. For the aristocratic populist, this obligation chiefly entails the idea of being in touch with 'your people'; their ideas, traditions, practices etc as you see them (this may have large fictional elements). Crucially, this means not dismissing commonplace ideas as backwards, incorrect, or bigoted. As Roger Scruton, one of the most influential thinkers on the modern British right put it, it means that politics must "reassure people that their prejudices are true".

This ideology is, on one level, inherently anti-intellectual, or at least opposed to certain types of expertise. It rests on the dichotomy of common wisdom, found in life experience and practical interactions on the one hand,  and theoretical, intellectualised understanding on the other. It is the idea that the prejudices of the common man are, for all their flaws, ultimately more sensible than the fashionable theories of intellectuals. It is, in many ways, a deeply patronising belief, as it assumes that 'ordinary' people are disinterested in and incapable of thinking beyond gut reactions, prejudice and acquired practical experience.

It is this kind of thinking that allows people like Johnson to have their reactionary cake and eat it. He does not have to actually belief, for example, in anti immigrant rhetoric himself. He can be perfectly familiar with the fact that economists tend to believe that the case against immigration has broadly been debunked. But he can believe that he is doing a kind of service, and following this sense of noblesse oblige  by not disavowing it either. Indulging common prejudices is a way of showing in-touchness with the people you govern, and a kind of act of solidarity. It is not about what you believe privately, or whether you, personally, have a problem with other ideas. But it is about whether in your mind you side with the fashionable theorists or the ordinary people, believing that the latter hold some kind of  greater legitimacy and deeper, if ineffable wisdom.

at September 04, 2020 No comments:
Email ThisBlogThis!Share to TwitterShare to FacebookShare to Pinterest

Contact budgets, work from home and "letting the team down"

I don't want to trivialise the potential harms of work from home. Clearly, there are at the very least some quite steep short term costs to services geared towards inner city office workers. True, there are presumably knock on benefits too, in the form of extra demand for cafes and businesses nearer to where people live, and presumably over the longer term you'd expect some businesses to be able to relocate. But even such changes have a cost associated with them, and whatever longer term shifts to patterns of work, you'd expect that if and when the covid threat does recede (through a vaccine or otherwise) there will be at least some degree of a return to the status quo ante. In purely economic terms, pushing against work from home does have some plausible rationale to it, even if this rationale is not particularly ideologically consistent with the mantra of the party in government.

What is harder to understand is how this push against work from home is remotely consistent with the government's covid strategy. The government's stated ambition is still to suppress viral transmission to the extent that a second wave of exponential growth is avoided. Covid cases already appear to be rising, and this is before we have seen the effect of school and university openings. There does not appear to be much room for increasing inter household close contact whilst maintaining the suppression strategy, if any at all. Encouraging people back into communal office space, (presumably) via public transport, in order to get more people into shops, cafes and pubs in city centres at lunch and after work is more or less definitionally going to push up viral transmission, presumably very substantially. And the government has offered absolutely no indication as to how this can be offset elsewhere or what the costs of doing so would be.

What would offsetting the shift back to the office mean? One way would involve massively increasing testing capacity and attempting to isolate larger proportions of infections, but the government has given no indication that this is indeed its intention, or how this would be logistically feasible in the necessary timescale. The alternative would be simply to reduce interactions between households elsewhere. This would presumably mean shutting other things down, though it is unclear what these things would be, or what the associated costs of doing so would be either.

Put simply, if we want to keep suppressing covid, there is, assuming limited efficacy of test and trace systems, only a certain amount of inter household contact that can be sustained. As Tony Yates puts it, we have a kind of 'contact budget' that we have to decide how to allocate (what, exactly, this is, may be difficult to determine and fluctuate according to levels of immunity in the population, seasonality, etc).  So long as the government wants to maintain a suppression strategy, it isn't good enough to point to the harms of work from home on parts of the retail sector, however real they may be, as sufficient grounds to end it. It has to demonstrate that hauling people back to the office is a good thing to shell out what is almost certainly a gigantic portion of its covid contact budget, if such a budget even allows a proper return to the office at all. This seems, to say the least, a rather dubious proposition.

In this light, it is particularly galling to see government cheerleaders trying to guilt people back into the office, claiming, as Sun editor Harry Cole does, that they are "letting the side down" by staying at home.Yes, some other areas of life have returned to normal. But this does not imply office work should do so too.  Because of its effects on covid transmission, an end to work from home would make it harder to keep schools open, not easier, would make it more of a problem that people are going to pubs, not less, and would make life for those who cannot work from home riskier, not safer. If the conclusion is that covid suppression simply is not worth it, so be it. But until and unless this is concluded, the government's messaging makes no sense. 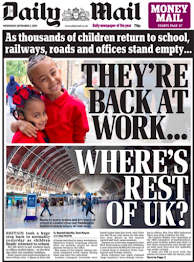