When people of a certain age talk about GCSEs, the conversation may well quickly turn to the old ‘O Level’ qualification, and, more often than not, how much harder these were than anything 16 year olds are expected to do today. Part of the problem with these conversations is that few people are in a position to make a real comparison. Most people have only ever seen one type of exam, and if it is the O Levels, this was a long time ago. Perhaps for that reason, when I was a teenager (I was a weird teenager) the old exams had a certain mystique. As somebody who got a little too much of their sense of self through exam grades, I couldn’t help but wonder how I would have done at them.  While I’ll never know the answer to that question, thanks to the wonders of the internet, it’s certainly possible to compare the two exams, if you are geeky and obsessive enough to do so. What follows are the results of that endeavour with the old Maths O Level, and an attempt to answer that all important question: how much harder was it really?

The first thing to mention is that the O Levels (at least the exams from the ’50s and ‘60s) feel in many ways like very dated exams. They are densely printed, long, and in terms of structure feel a lot more like university exams. They have two sections, one of short questions and one of longer questions of which you choose a few (GCSE Maths papers don’t involve any choice). 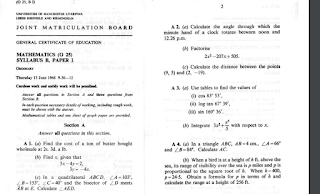 Some of the material is very much from a time when people didn’t have calculators. There are lots of questions which are clearly testing your ability to use logarithmic and trigonometric tables and others which ask you to approximate π as 22/7 (at GCSE you’d either just put it in a calculator and round, or give your answer as a multiple of π, but it's still a nice approximation to use for rough calculations). There are then arithmetic problems which require some numerical manipulation to solve, often better thought of first as algebraic expressions to simplify, such as these ones here:

You can see why there would have been a greater focus on numerical skills before calculators, but I think it’s a bit of a shame this kind of numerical manipulation isn't taught as much anymore, as it can help children with algebra.  Part iii) of this question is also a reminder of another pesky feature of these exams: old, imperial units and pre-decimal currency (I couldn't answer part iii without looking up how many shillings there were in a pound!)

That said, there is a lot about the exams that hasn’t changed at all. The algebra is pretty much the same, both in terms of content and level of difficulty (if we are comparing the O Level to the Higher Tier GCSE, after Gove’s reforms. The Foundation is dramatically less challenging, and prior to Gove’s reforms the GCSEs were considerably less difficult). This question, for example, taken from a 1962 O Level exam could have come straight out the GCSE were it not for the font:

There are a few algebra questions in the O Levels which do seem a little more inventive in terms of what is asked. Question 4 (ii) below, for example, requires students not to solve for a single unknown but a quotient of two. That said, how difficult this kind of problem is very much depends on whether you have been taught to do it before or seen it for the first time, and I haven’t seen enough papers to know if this was a standard problem.

The section B algebra problems also seem to have required a little more in terms of initiative and personal input to solve. This one here, for example, I could only solve easily by introducing two unknowns of my own (I used n for the initial number of items sold and N for the total) which you could then get rid of by rearranging. 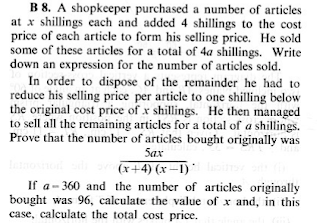 The GCSE does require algebraic proof and introducing an unknown to solve numerical problems, but not introducing several unknowns to derive a purely algebraic expression which does not contain the variables you’ve introduced. An example of the type of problem tested at GCSE is here, which you solve by forming a quadratic (e.g by setting the number of green pens as x and blue as x+ 3).

One way in which the O Level was definitely more challenging was the geometry. GCSE geometry questions tend to provide diagrams, the O Levels required you to figure out yourself what they would look like based only on worded descriptions. This question here, for example, could easily be a GCSE question, but there is no way they would ask you to do it without a diagram provided.

The proof questions were stylistically different, but don’t seem all that much more challenging. The main difference is volume: the O Level papers seem to have a lot of geometric proof involved, whereas on the GCSE there will only be a couple of questions. Below, for comparison, are two geometric proof questions, first a 1968 O Level and below that a 2017 GCSE question. 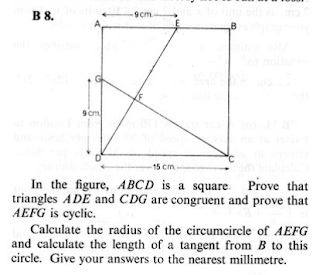 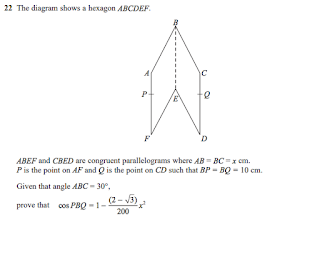 Content wise, the other main difference is that the O Level was in some ways a narrower exam. In the 1950’s and 60’s papers I didn’t find any statistics, data handling or probability questions, and very little on volumes, number properties, primes factor decomposition or surds. Algebra, geometry and doing long calculations with tables and slide rules seemed to be the greater focus. That said, the O Level did require knowing some basic calculus, and apart from the Edexcel IGCSE this isn’t taught until A Level (and even with the IGCSE there is no integration). And one exam I found from 1957 also had a rather charming third paper on the history of mathematics. I don’t know if this was a common part of the curriculum or not, but there is certainly something wonderfully quaint about it. 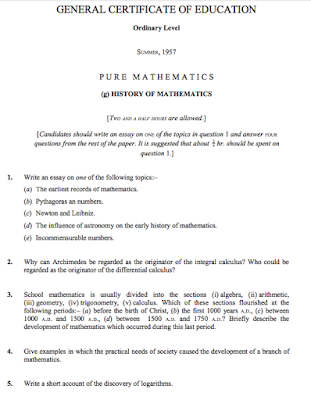 So, all in all, was the O Level Maths exam more difficult than the GCSE? Compared to the exams I sat, pre Michael Gove, I regret to say the answer is certainly yes. Compared to the exams students sit now, I’m less certain. There are certainly fewer gift questions (even the higher tier GCSE still has a some very easy questions at the start of the exam, the O Level seemed to have fewer, and they were less easy). On balance, I would still conclude that the O Levels were a little more challenging, if nothing else because they required more personal input and initiative to do start the questions (introducing your own variables, working out what a geometry problem looks like based on a description). But they aren’t a million miles away from one another.

at November 08, 2019
Email ThisBlogThis!Share to TwitterShare to FacebookShare to Pinterest